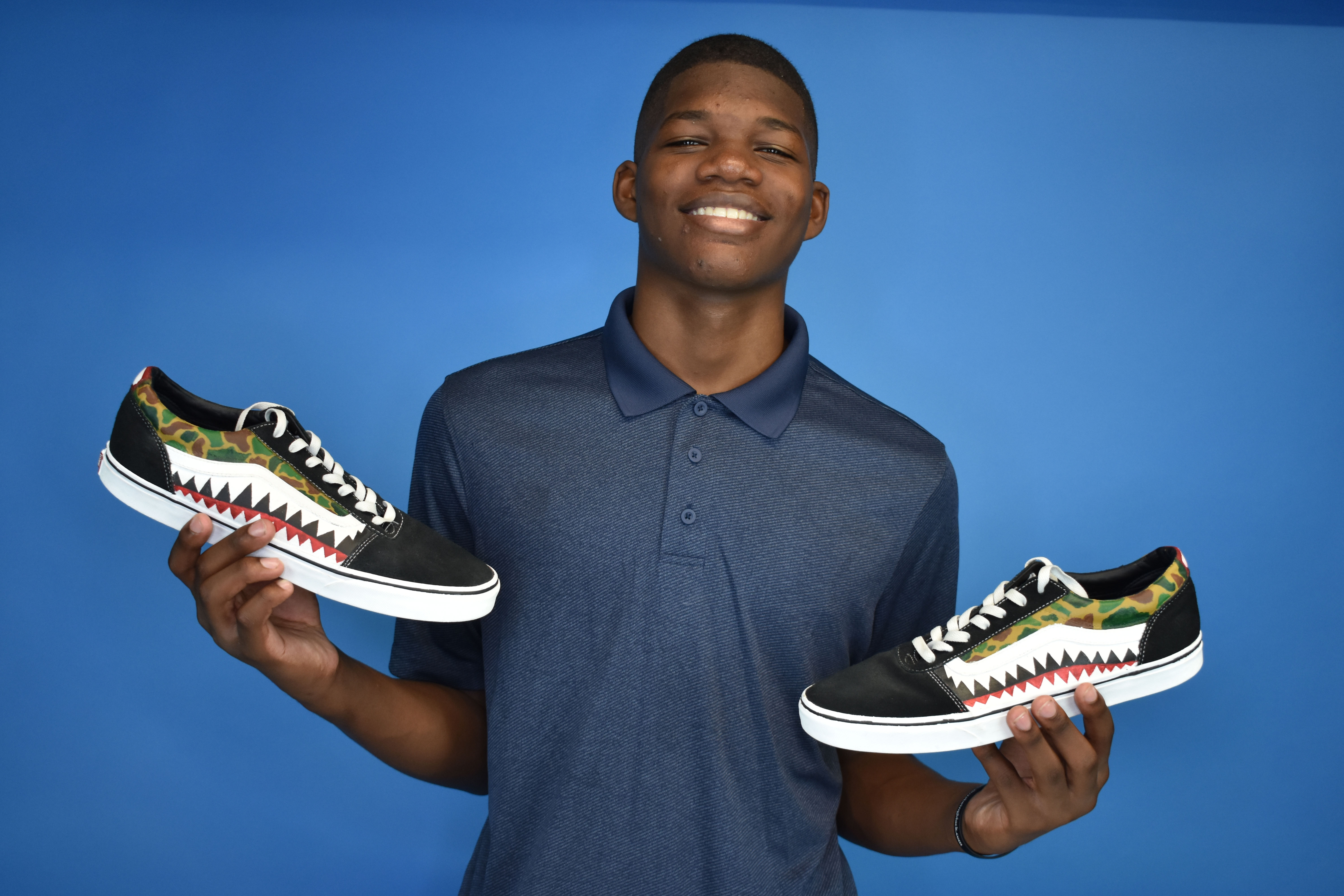 Ashe: Let’s get right into it. Tell us about your business.

I got the idea watching Youtube. There is a video of this dude restoring shoes. I was intrigued. The more recommended videos came in brought in customs. Taking an all-white shoe, like an Air Force One, and making them look custom, like something different than the designer intended and making them look much cooler. I was like, “you know what? this is actually pretty dope.”  So I had a pair of vans, and I don’t usually wear vans, but I asked my mom if I could get some paint to customize my vans. At first, when I did it I got regular acrylic paint which is not what you’re supposed to use. I got em done and was like this is really dope.I think  I’m actually good at this. I did more research after that.

As far as the business aspect of it, my mom told me this and it stuck with me forever,‍

“Once you start working, you aint gone stop.”

So far it’s going well. At first, I wasn’t thriving as much as I wanted it to. At first I was a teenager in high school, some people didn’t have full trust in me, but my friends gave me a chance. My friend Jason and Marquis gave me chances with their shoes. They said, “You actually really good.” So I made $60 on each pair, so that was $120. At that time I was like, “I made $120 in one week doing something that I like.” I just can’t focus on kids anymore because they don’t have consistent income.  So adults, I know they don’t like that flashy stuff so we started doing restoration, (taking that beat-up shoe) and try to make it as new as possible. Even if you don’t get it to 100% factory, you could still get it to 90%. My dad hooked me up with his friend and his friend gave me two pairs of his shoes to restore. He gave me the first ever Lebron James shoe. So I restored them and gave them back. He said, “man you did a good job”  That kept me going because of the money I was earning. Finally, I was at my dad’s and he took a picture of me in my formal outfit and he said, “Post it on Instagram”  and everybody started hitting me up. Snapchat, Facebook. People started hitting my dad up. People started hitting my mom up.  It inspired me to keep going.

Since I was in school and doing basketball I couldn’t be super consistent but once this quarantine hit, man. . .

Now my mom has taught me to keep a ledger and do receipts and I got to get a business license to make it legitimate and official. Basically, that’s how the whole thing started. I can’t take all the credit. With the help of my parents, that’s how I did it.

Ashe Magazine: Who inspires you on a personal level?

My grandfather used to be an engineer and he had a similar story of not wanting to work for anybody. So he taught me the difference between a rich man and a wealthy man. He said,

‍“Would you rather be a wealthy man or a rich man? A rich man works hard to make a lot of money and spend it, the wealthy man lets the money work for you”

Ashe Magazine: How do people become a client?