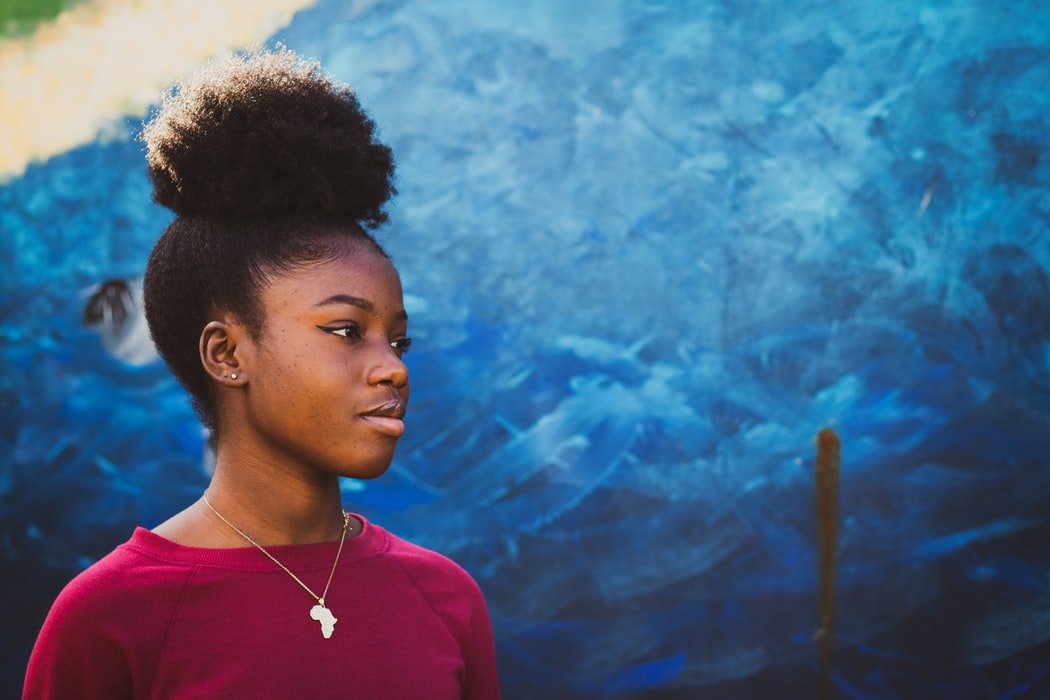 “Hair-based discrimination against natural styles, including dreadlocks and braids, can target black communities, where such styles have cultural importance and historical significance. Because of this, banning such styles — or banning the length of such styles — can perpetuate harmful and racist stereotypes about hair while also determining what is seen as a ‘professional’ haircut.”

All the usual places where kids would scream about their math tests or get asked to winter formal were all empty now, just lockers. Of course, this was because everyone was in class, except for Cami. She was sent to the principal’s office for one reason: hair texture.

Black women are 30% more likely to be made aware of a formal workplace appearance policy.

Growing up, Cami was used to the ins and outs of straightening her hair.

“Don’t move when I put the chemical on.”

“Don’t get your hair wet until we wash it again next week.”

It was just a way of life for her. She knew she couldn’t hang out with friends on the weekends because of this, she couldn’t go swimming without a ridiculous cap on her head. No one really seemed to understand why she couldn’t just wash her hair during the week or come hang out afterward.

All of her friends looked the same as each other: White. Straight, brown hair, straight blonde hair. They all washed their hair every other day and their mothers curled it when necessary. They could swim whenever they wanted.

It was the dream life that Cami wanted, but could not have:

She was Nigerian American, with the coiliest of thick and black tendrils surrounding her face. She just wanted to look like her friends, so she straightened her precious strands. She didn’t realize that there was a school rule that did not allow her to wear her natural hair. This rule had been established decades ago when the school first opened, an all-white school. She did this over and over again, once a week, every year for 8 years.

Until she saw a YouTube video one day that changed her life.

She was scrolling on Youtube when the title “STOP STRAIGHTENING YOUR HAIR” leaped from the screen. She clicked on it and was amazed. Cami didn’t know that what she was doing was ruining her hair, destroying her curl pattern, whatever that was,  and eventually all of her hair could fall out if she continued. She decided to stop straightening her hair.

It was the summer before the 9th grade, so she had a few months to get a decent curl pattern going. Cami took care of her hair: She did more research on hair texture, washed it once a week, did as many protective styles as she could. By the time she went to her first day of school, her hair was doing much better than it was in the summer.

But there was “the policy.” Cami still couldn’t wear her natural hair out. She had it braided for the first month, but she soon learned that she would have to take her braids out. Braids in. Wait for 3 weeks. Wash. Wait two days. Braid and the cycle started all over again. By the end of the first semester, she had had enough. It was time to take action.

She started with a small rebellion. She only wore head wraps for a week. The next week she took it further. She wore her hair in small twists that looked like braids, but without the extensions in.

That third week she took a leap of faith.

On Monday, Cami wore her hair in a big puff. Her teacher immediately gave her a warning that if she did it again she would face consequences.

“What is wrong with my hair, Mr. Johnson?”

“Nothing, it’s just against school rules, so I will have to report you next time.”

“But there’s nothing wrong, why should I be punished?”

“Stop asking me questions Cami, I don’t have answers!”

“Black women’s hair is 3.4 x more likely to be perceived as unprofessional”

But that did not stop Cami in the slightest. She wore a big puff again on Tuesday. Mr. Johnson immediately sent her to the office. The front desk lady handed her a note that read “Dress Code Violation” at the top and handed her a hat.

“Please wear this hat for the rest of the day.”

“That’s the biggest we have, just put it on and deal with it,” the front office lady replied. “Don’t break the dress code next time.”

Cami paused. “May I ask why this is such a problem to the school?”

“Can I make an appointment with the principal?”

Cami kept wearing her hair out, kept getting sent to the office, kept on getting hats that would not fit in any universe. Finally, after two long weeks, she got a letter from the superintendent allowing her to meet with him. Cami was very excited. On that day, she decided to wear a simple bun, to show an example.

All the usual places where kids would scream about their math tests or get asked to winter formal were all empty now, just lockers. Of course, this was because everyone was in class, except for Cami.  She reached the end of the hallway. When she saw the superintendent, her heart was beating so fast. She quickly said, “hello” and began her speech that she had prepared weeks before.

“Good morning and thank you for meeting with me. I have invited you to reconsider a rule in your dress code policy, one that attacks me personally. This would be the hair rule.” She pointed at her head. “In your policy, this would be out of dress code. A simple bun. I’m asking if you would be willing to change this because it is not allowing me to fully express myself in the ways that I choose. Thank you for your time.” Cami stopped. She had already prepared herself for the backlash or just “no” as an answer. She watched as they looked around. The superintendent asked, “Why should we change this policy now? This has been established since the school first came into existence. There have been plenty of African American children that have passed through our school. Why the sudden need for change?’

Cami then spoke, “With all due respect, this rule was created at a time of injustice. You and I both know that this school used to be an all-white school before the law changed. This rule is only to ensure students who don’t look like me don’t come to this school. After all, 80% of African American students at this school drop out before their senior year. But I refuse to let this continue. The world is changing and everyone needs to be aware of each other’s cultures. And I need to stand up for the rights of the 20%, which includes me. This school is still one of the tops in the county for going to college.”

There was silence for what seemed like forever. Eyes darted around the room, some administrators in shock, others looking at each other wondering what would happen. Then the superintendent spoke. “I see your point of view. The rule will be out, but it may take longer than others since this rule has been established for a very long time. You may wear your hair however you want, just note that some teachers may still ask for disciplinary action.”

Cami was overjoyed. She thanked everyone at the meeting (even those who gave her nasty stares) and came out of the board room skipping with glee. The next month, Cami walked into campus and saw so many puffs and Afros. She sighed. Cami had accomplished her goal. Now she could truly be herself. And no one could stop her.