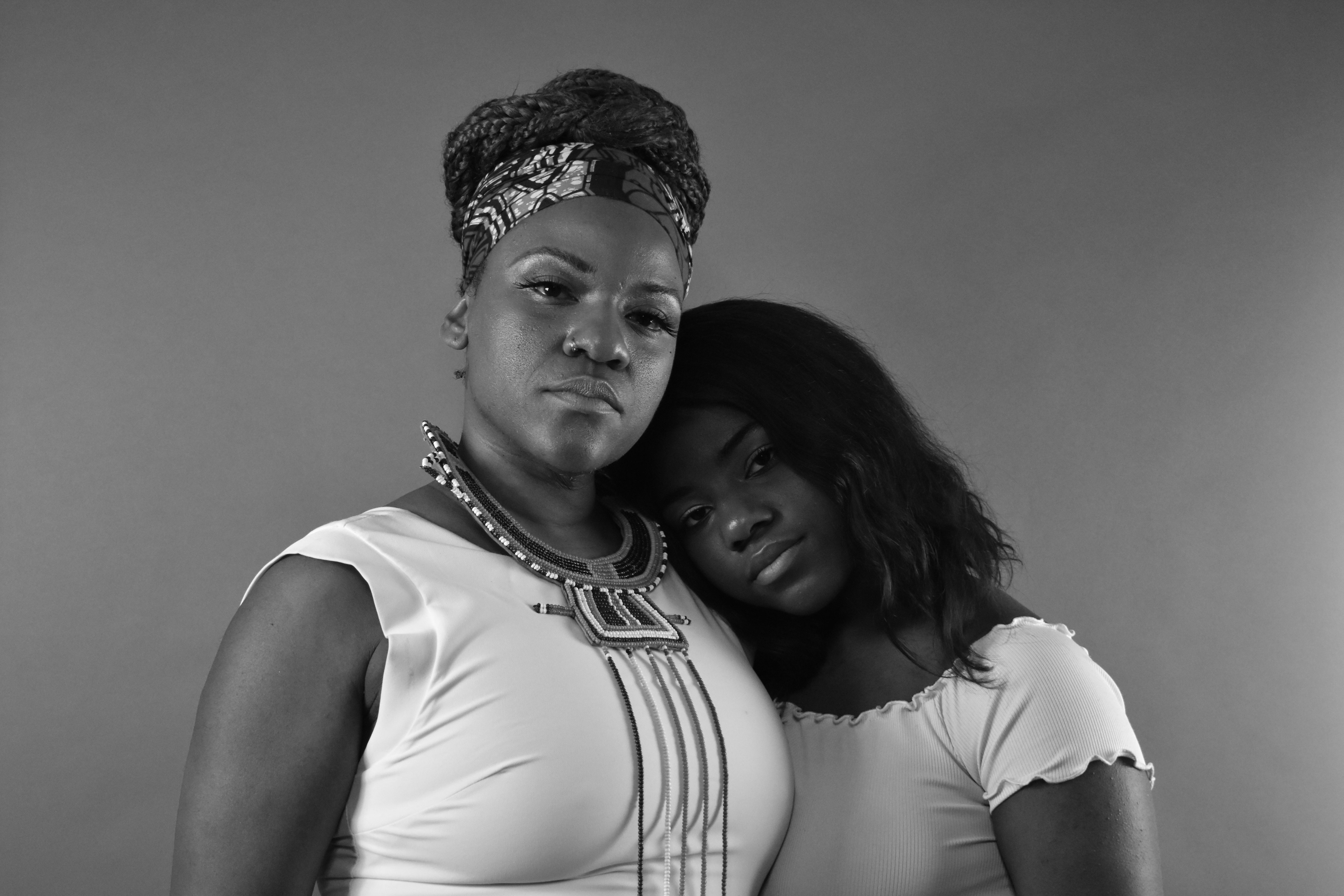 By Jamillah “Lila” Finley with contributions from Zee Finley, Age 13

What happens when you learn to juggle razor blades? Maybe you get good at high achieving behavior, even after it becomes risky and potential self-harming. As Black women, and even girls, we often feel the pressure to be the best. We may feel like we have our entire culture on our back. We may feel like we have to overachieve at the expense of our health, never resting or taking days off even when we’re sick, and fearing failure. How do we slow down, rest, or even stop to save our lives?

Our families may have made it clear to us that we are responsible, with our blood sweat and tears, to be excellent, thereby proving the stereotypes wrong. Dr. WEB Dubois popularized the notion of the “Talented Tenth,” those exceptional Blacks who were responsible for racial uplift in society. This task can be a heavy burden.

In a recent therapy appointment, Ashe’ magazine founders, Jamillah and Zee Finley, discovered how their family’s “legacy of excellence” might be a blessing and a curse.

Therapist: Today, I want to talk a little bit about generational trauma. What do you think was the legacy or culture of excellence in your family?

JF: What do you mean?

Therapist: Z says that the folks in your family, particularly the women, are high achieving. So everyone in your family has college degrees?

JF: Yep. We saw no other option. My family grew up in the South. North Carolina.

ZF: And your mom had a ph.D

ZF: It set a standard for excellence. And most of my family members are teachers, so education is really important.

Therapist: So is there a lot of pressure for Z to get good grades?

JF: I mean can a Black girl get C’s? Isn’t that what’s expected? I guess she might feel like if she’s not an A student, her teachers won’t respect her. Maybe she doesn’t think it’s ok to be Black and average in this society..

Therapist: That’s a lot of pressure for her isn’t it?

JF: I guess it is. But it’s the reality for Blacks in America. I wish it was different. Other than teaching her to do her best, there is nothing I can do to change the way this country is set up. Have you ever heard of “the equation?” My mother taught it to me, and I guess I passed it on to her.

ZF: Black people have to work harder than everyone else.

JF: Let’s be more clear, “you have to be excellent to be seen as average. You have to be good just to be seen,” and if you are below the standard, you are already out of the picture.

Dr. Joy Degruy determined that multi-generational trauma changed the way that generations of Blacks raised their children. Her book and study guide helps readers understand how first generation trauma impacted the lessons about life that society taught them and the behaviors they had to adapt in order to survive. After twelve years of quantitative and qualitative research, Dr. DeGruy developed her theory of Post Traumatic Slave Syndrome, and published her findings in the book, Post Traumatic Slave Syndrome – America’s Legacy of Enduring Injury and Healing.”

Causes of Trauma during Slavery

• Worked from sunrise to sunset to an early death

How did the trauma of slavery have such a lasting impact?

Working Like A Slave: 5 Traps in Pursuit of “Excellence”

“Never knew rest. . . Felt like my back gone break; this the gospel truth”

Lupus doesn’t run in my family, but high achieving folks do. I come from a long line of nationally recognized, award-winning professionals who worked hard quietly behind the scenes to provide quality service and care to those they encountered in all of their endeavors. I saw my mother, “work her fingers to the bone,” and “work around the clock,” to make sure things were done well. Often, single-handedly carrying the load of five people. I remember the work ethic of my mother, whose God-given gifts allowed her to operate, with what seemed like endless, effortless energy, never asking for help, never missing a beat in service to her community. I never once questioned this approach to career and community service. I only believed that this level of self- denial was noble. It was in my blood. I never considered that perhaps this ethos had deeper roots than my family bloodline. I carried the innate belief that I was born to make the world a better place. To do the best I could do, and be the best that I could be.. To do the work of righting the ills of a harsh world. I set about this mission with passion and grit. I would not fail my calling. By society’s standards, I was excellent- award-winning like my mother and grandparents before me. But there was one great and unintended, private failure- I was doing a terrible job of taking care of myself, and it almost cost me my life.

Showing up to work on my days off, or consistently working after hours. I thought my value was measured in my dedication to my work. I thought excellence equated to hours put in. It simply established a pattern of availability, and signaled that I was willing to sacrifice myself. Self-denial is a red flag that you are working like a slave. Don’t be afraid to take stress leave or use your disability leave, FMLA, and sick/mental health days to make sure that you take care of yourself first.

Chronic stress and working long hours over the years, compromised my immune system and made me more susceptible to autoimmune diseases. Exhaustion and stress are lupus triggers. When your work-life balance is healthy, life can throw you a curveball, and you won’t be down for the count before the game is even started. Hypervigilance and hypersensitivity are trauma responses. In today’s racial climate, it may seem perfectly normal to be on high alert about what a person will think of you because you are Black, but the strong Black woman stereotype is the one that we as Black women and girls are most susceptible to. The false narrative that we are capable of handling more pain, stress, or hard work is a lie that we have to stop telling ourselves. We were seen as strong and needed to be to survive. We then internalized this brutalization.

Working through my lunch, or skipping meals throughout the day to get work done eventually caught up with me. Eating fast food, and eating on the run because of my busy schedule lead to vitamin deficiency, dehydration and anemia. I later learned that my depression was caused by my lack of VItamin D. When students came in to ask for help, I would routinely let my food get cold or forget to eat it, in the name of being helpful and available.

Plan to do less in a day. Pace yourself. Take time to eat. Stopping to eat a snack, eat lunch, or simply take a nap is brilliant self care. These basic human needs must be met in order to do your best work. Consider bringing a flask and keeping a lunch bag or a bag of snacks on your desk. If you forget to bring food- hit up a responsible friend who wouldn’t mind sharing with you. They might be willing to hold you accountable if you frequently forget self care until it is a habit of your own.

“These misconceptions about pain tolerance, seized upon by pro-slavery advocates, also allowed the physician J. Marion Sims — long celebrated as the father of modern gynecology — to use black women as subjects in experiments that would be unconscionable today, practicing painful operations (at a time before anesthesia was in use) on enslaved women in Montgomery, Ala., between 1845 and 1849. In his autobiography, “The Story of My Life,” Sims described the agony the women suffered as he cut their genitals again and again in an attempt to perfect a surgical technique. . .”

• Perceived negative motivations of others

Working on projects after 8 pm did not give my brain the shut down from stimulation needed to get a good night’s sleep. Lack of rest actually made me vulnerable to depression, anxiety and many of my trauma triggers.

“. . .The study found a link between insomnia and suicidal thinking: The more severe a person’s insomnia was, the more likely he or she was to express suicidal thoughts and desire. . .”Source: Why Insomnia Increases Suicide Risk By Rachael Rettner February 20, 2013 Place limits on what you can do by when. Consider seeing a good therapist, joining a local support group, and journaling. Have a toolkit or a mental health first aid kit that includes breathing, meditation, journaling, exercise, and creativity. Learn to value your sleep as much as you value hard work. You’re worth it.

Growing up Black, we are painfully acquainted with conversations about how Blacks measure up in society.

Our parent’s need to prepare us for the harsh world of racism may have come across as demanding and pessimistic. After desegregation, we often forget that many Blacks lived in social isolation and faced the difficult task of being the only Black in their neighborhoods, schools, jobs, and organizations. The burden of representation grew heavy. Perception could mean life or death, opportunity or unemployment, poverty or sustainability. The American “melting pot” was turning into a pressure cooker for many Black families.

Many marginalized groups experience higher rates of post-traumatic stress disorder (PTSD) than white people. Much of this trauma stems from experiences with racism or racist systems.

So, where do these stereotypes come from?

Beliefs that blacks were “mentally inferior, physically and culturally unevolved, and apelike in appearance” (Plous & Williams, 1995, p. 795) were supported by prominent white figures like Abraham Lincoln, Andrew Johnson, and Thomas Jefferson. Theodore Roosevelt publicly stated that “As a race and in the mass [the Negroes] are altogether inferior to whites” (Plous & Williams, 1995, p. 796).

When the highest officials in the land, tout racist or anti-Black rhetoric, it gives the American public permission to exercise blatant discrimination. Imagine how it must have felt for our ancestors to hear the nation’s presidents openly denigrate our intellectual ability as a people. The compulsion to over work, outperform, or be excellent is a natural human response in all people, but often we are only working against an imagined or internal judge. For Blacks, the internal judge is louder because many Blacks internalize racial stereotypes or become obsessed with how they may be perceived by others. Then we work compulsively to try to overcome those ideas. We have only yet to begin to understand that it is not our responsibility to manage other people’s judgments. This is why there are so many new movements to encourage Blacks to tend to our own basic human needs while in the pursuit of excellence. This is true freedom.

Sunup to Sundown picking that cotton

Sunup to sundown whipped by the massa

Sunup to Sundown chains and shackles

No more auction block for me

No more auction block for me

1. Hurwitz, J., Peffley, M., & Sniderman, P. (1997). Racial stereotypes and whites’ political views of blacks in the context of welfare and crime. American Journal of Political Science. 41, 30-60. Jewell, S.K. (1993). From mammy to miss America and beyond: Cultural images and the shaping of US policy. New York: Routledge.